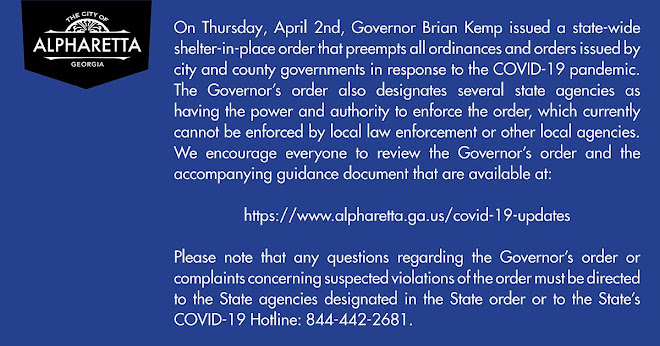 We know there is growing concern over the Coronavirus Disease 2019 (COVID-19). We want to help you stay informed with latest information so that you can make sound decisions to keep yourself and those you care about as safe as possible. We will keep this page current with important information because we want you to know what we know.

Please Check Back Often For Updates

Alpharetta Closes Most Parks; Paths And Greenway To Remain Open

From the City of Alpharetta:https://www.alpharetta.ga.us/about/news/2020/03/24/alpharetta-closes-most-parks-paths-and-greenway-to-remain-open

Alpharetta Closes Most Parks; Paths And Greenway To Remain Open

As part of its response to the COVID-19 pandemic, the City of Alpharetta has enacted an emergency ordinance temporarily closing most City parks and park facilities.  All City park facilities, buildings, offices, fields, courts, pavilions, playgrounds, the Town Green, and restrooms are closed for 30 days.

Trails, paths, and the Big Creek Greenway will remain open under the action; however, individuals using them cannot gather in groups of ten or more.  The emergency ordinance also requires everyone to maintain social distancing of at least six feet unless the individuals live in the same home.

The emergency ordinance is effective immediately and will remain in effect for 30 days unless repealed or extended by the Alpharetta City Council.

City staff will begin placing barricades at the entrances to the parking areas at most City parks to aid in enacting the emergency ordinance. 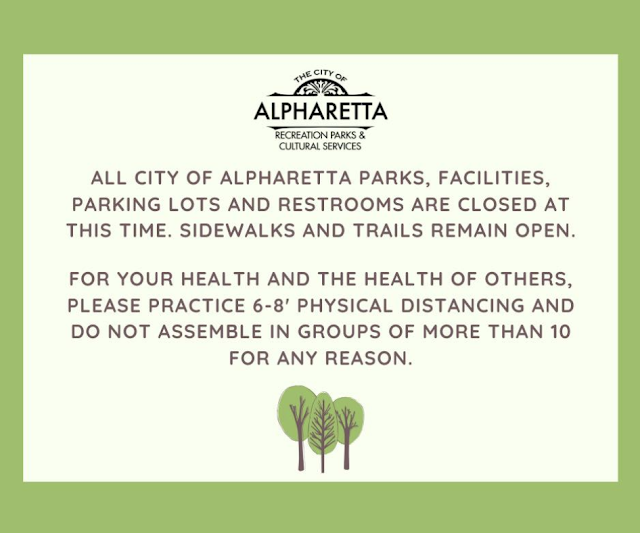